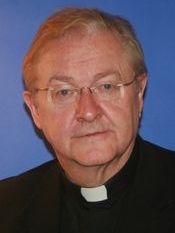 The leading expert in America on The Troubles in Northern Ireland is Father Sean McManus (78), President of the Capitol Hill-based Irish National Caucus, and Chief Judge of the World Peace Prize.

Brexit and the British government betrayal of the Good Friday Agreement have put Northern Ireland back in the news. Nobody in America knows more about Northern Ireland's Troubles than Fr. Sean McManus, originally a native of Northern Ireland, who for 50 years has raised the issue in the U.S. Congress—as explained in his memoirs: My American Struggle for Justice in Northern Ireland.

Why is Northern Ireland back in the news?

A native of Northern Ireland, Fr. Mc Manus has an unequaled, almost 50-years-record of lobbying Congress for unity, justice, and peace on the entire island of Ireland, in solidarity and mutual respect.

As the late Congressman Ben Gilman (R-NY), Chairman of the House Foreign Affairs Committee, stated: “Nobody has done more than Fr. Mc Manus to keep the U.S. Congress on track 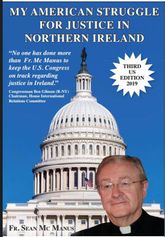 regarding justice in Ireland.”

Fr. McManus was “exiled” from England to America by Church and State on October 2, 1972, because he refused to be silent (and, therefore, complicit) about British government injustice and oppression of Catholics in Northern Ireland.

Learn how the British government set up a racist (anti-Irish) and sectarian (anti-Catholic) mini-State of Six Counties (out of Ireland’s 32 Counties) to preserve a foothold for England through Unionist/Protestant supremacy—and how the USA for far too long did nothing to help until Fr. McManus started raising consciousness in America.